Even though we have access to many brands we do not stock, these profiles are designed to help you understand the value we see in the brands we stock and why they are category leaders. One of the best carbon fiber bicycle frame builders on the planet is Parlee Cycles out of Beverly, MA. While Parlee does not make entry level bikes, they do build a wide range of bikes starting around $4000. Anyone thinking about a carbon fiber should at least know about Parlee Bicycles as they are truly special and more accessible than many people think. Point of Origin: The Parlee Z-Zero, Z1, Z2, Z3 and TTiR Custom are handbuilt in MA. Parlee Altum, Chebacco and TTiR Disc models are designed in MA and made in a specialty carbon facility in Asia to Parlee’s exacting specifications.

Delivery: Parlee Altum models, the Chebacco and the TTiR Disc are often available immediately (add a couple weeks for custom paint). Made in the U.S. Parlee frames are built to order and are usually shipped 8-14 weeks from order. Parlee Cycles started with one goal: to build the best carbon fiber frames they could. This meant not trying to sell 10,000 frames a year, but instead building each frame one at a time with as few fillers or compromises as possible. With a Parlee, what you see is what you get. Parlee was one of the first carbon builders to allow for customization, to offer top grade high modulus carbon fiber, and to use titanium instead of aluminum on the structural metal work of many of their frames and to build models with full carbon dropouts. They were also the first company to build a disc brake equipped triathlon frame.

What Stands Out About a Parlee Bicycle? were conceived around the same time. As we grew, we kept hearing about a new carbon fiber frame builder outside of Boston named Parlee Cycles; we heard enough to want to learn more. As we started talking to Parlee more, one thing that stood out was their dogmatic approach to building frames – simply put, they would not build a bike for less money if it meant compromising quality or ride. Parlee’s goal was to build the best riding, best fitting and best performing carbon fiber frames in the world and they seemed to be well on their way to certainly being contenders for that title only a few years into their existence.

In 2005, we decided to make a line change and switched our focus from our previous custom carbon line to Parlee. Two athletes from Texas came up for fittings and ordered the first two and we have been working with Parlee ever since. In 2010, Parlee moved into a a new factory in Beverly, MA, just a few miles from Fit Werx in Peabody, MA and we see Bob Parlee and his wife Isabelle at Fit Werx in Vermont when they come up for skiing and to visit family. Fit Werx has been proud to be a part of Parlee as they build a great history and continue to progress and expand their reach to now include a full range of production and custom bikes. In many ways, Parlee is no longer a niche brand – they are innovators that often push the big companies to keep up. Today, they offer a continuously growing range of custom products that start around $8000 built up and ready to ride, as well as stock “ready to ride” carbon fiber bicycles starting just over $4000.

Parlee is one of the only companies in the bicycle business, big or small, that actually builds their own carbon fiber tubing. Why? They don’t like doing what everyone else is doing. They don’t like to be at the mercy of suppliers when it can be done as well, or better, in house. They don’t like compromising. In addition to taking the huge step of producing their own tubing, Parlee designs and produces their own line of carbon forks, handlebars, stems and seatposts. There are now a number of builders who buy forks and other accessories from Parlee for their own frames. We think it is great that Parlee has recognized the downward pressure that the industry has been putting on smaller companies and is actively doing something about it that leads to better products and fewer issues.

Parlee builds all of their frames out of multi-modulus carbon fiber – some of the best available in the industry. All of Parlee’s custom frames that use metal in their construction (Z1, Z2 and Z3) use titanium dropouts and bottom bracket shells to maximize durability and eliminate the potential of galvanic corrosion that can afflict the aluminum inserts found in most carbon frames. Each custom frame starts with a tube selection to match the individual rider’s needs in regards to weight, stiffness and compliance while all production bikes are use carbon fiber lay-up specific to their size and use. All Parlee frames are distinguished by their fiber lay-up and tube design as well as their proprietary molding process. Parlee frame components (dropouts, cable stops, bottle bosses, wishbones, etc.) are built specifically to their needs as well. They don’t use gimmicks or inferior off-the-shelf products just to save money or to create a fancy ad slogan; they just use solid rational design and execution processes. 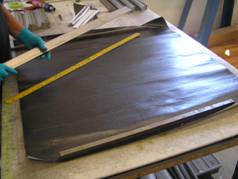 Parlee’s tubing is engineered to have the best strength to weight ratio possible. For this reason, you won’t see extraneous shapes/curves/flares on a Parlee – instead you find very functional tubing that is purpose specific and any shape on a given model is there for a very specific reason. The purpose is to create as balanced and high performance a ride as possible.  The result is that each Parlee bicycle, like their founder, has a personality. Judging from athlete feedback and the press, we are not going to be asking them to change the way their bikes ride anytime soon.

Parlee aims to be defined by their build quality and ride quality characteristics. Whether you are looking at the top of the line fully custom Z-Zero or the stock Altum, the same engineering principles are applied across the line and this approach creates a signature Parlee ride. The Parlee ride is one that is livelier and more forgiving than most carbon frames on the market, while simultaneously being exceptionally light and responsive.  Parlee also understands that making a bike as laterally stiff as possible is not a good goal; Parlee bicycles offer a balanced amount of stiffness that provides the rider with a rhythmic feel rarely accomplished with carbon fiber. Many riders would say tha t a Parlee is as uncompromising a ride as you can get carbon fiber bicyles. Bob Parlee would say that carbon is the first material in bike design that allowed him to create the ride characteristics he wanted and he wants every Parlee bicycle to fully capture that potential.

Beyond ride, Parlee understands that a nice frame should be an investment and one designed for the long-term. There are few things more unfortunate than seeing your beautiful bike spiral into a guard rail at full speed after an unplanned separation from your body. The vast majority of carbon frames find an accident a brutal and very final ending. Parlee does not believe that a bike frame, regardless of material, should be disposable. This means starting with the strong, higher modulus uni-directional pre-preg carbon materials to maximize durability and ending with making sure that their design allows for frames that are some of the most repairable available (hey, accidents happen…). Parlee frames are designed and built for riders that understand that you tend to get what you pay for and that a nice frame should be looked at as a long-term investment. In the next ten years, you can buy three or four generic riding mass produced frames, or one exceptional Parlee. Parlee offers stock geometry only bikes that are made to Parlee’s exacting standards by an overseas factory and they offer customizable frames that are built by hand in their factory in Beverly, MA (just a few miles away from Fit Werx in Peabody, MA!).

Parlee’s stock geometry line is simple and well thought out geometrically. They are one of the few companies that understands the wide range of frame geometry needs of a variety of athletes and builds a straight-forward line that reflects that. It is refreshing that Parlee understands that there is a huge variety of fit needs that need to be addressed, but they don’t do that by trying to prescribe a certain type of fit (“Endurance” geometry vs. “Race” geometry). Instead, they design frames that are designed to have as much flexibility as they can in terms of sizing and then let the rider choose the model that best suits their use. For example, many of Parlee’s stock frames are available with adaptive head tube heights that have around 1.5cm of adjustment.

Parlee Cycles offers handcrafted frames that are built in MA and are available in stock frame geometry or custom for both road and tri.  The custom handcrafted road frames are the Parlee Z-Zero, Z1, Z2 and Z3 and the Parlee TTiR Custom is the hand crafted custom TT/Tri frame. They also offer derivatives of these frames for cyclocross, adventure riding and touring. Not too complicated, right?

While the top of the line made in the U.S.A. bike, the Parlee Z-Zero, has its own distinctions with its tapered fork, BB30, disc brake options and molded carbon dropouts, there is often confusion when trying to figure out what the differences are between the rest of the handcrafted road frames. So, what is the real difference between a Z2 and a Z3? In a nutshell, the Parlee Z1, Z2 and Z3 all use the exact same tubing quality and have the same tubing options and fabrication. They differ in that the Z1 (the original Parlee custom frame design) offers a split rear seatstay design, to maximize vibration damping in the rear triangle and minimize weight, while the Parlee Z2 and Z3 use a monoblock seatstay which is easier and less pricey to build. The Parlee Z2 and Z3 only differ in top tube geometry and are otherwise identical; the Z2’s top tube is horizontal and the Parlee Z3 uses a sloping top tube. Most other hardware and custom options are the same between Parlee models. That’s it.